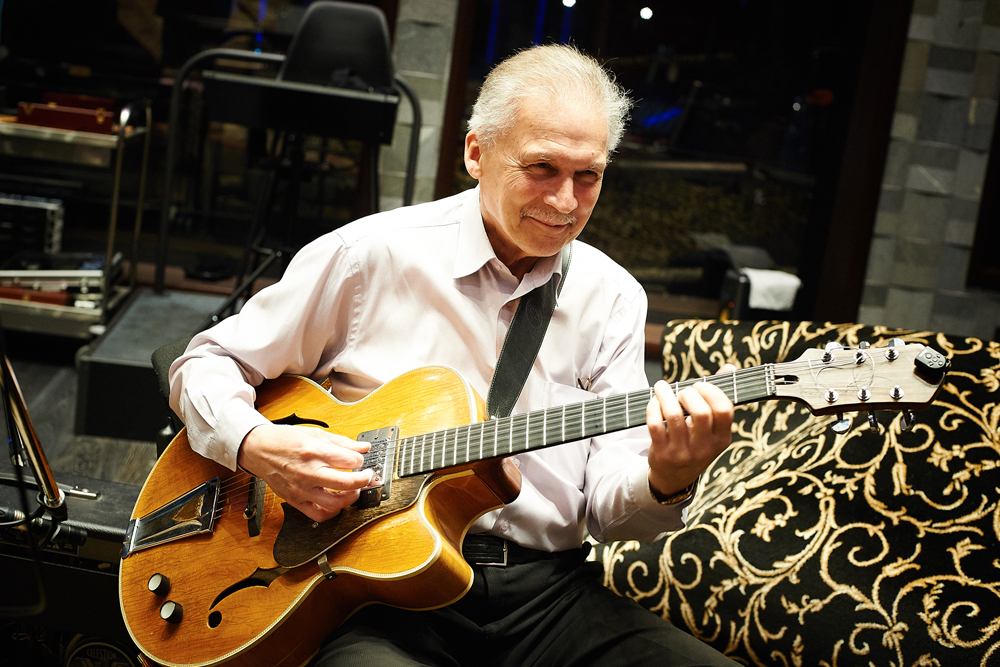 One of the 1960s pioneers of electric guitar in Soviet jazz, Alexey Kuznetsov’s career in jazz spans over nearly 60 years. One of a few living Russian jazz musicians decorated by the honorary title of the People’s Artist of Russia, Kuznetsov remains the most popular and renowned jazz guitarist in his native country.

Born in Chelyabinsk, Russia, in 1941, Alexey Kuznetsov grew up in Moscow, where his father, also an Alexey Kuznetsov, played in the Yuri Silantiev’s Radio and Television Orchestra. Later on, Alexey’s father worked as a guitarist in the famed Boris Tikhonov Quartet, one of the 1950s Soviet Union’s most popular instrumental combos, which performed light dance music.

It was his father’s guitar the young Alexey tried first, although what he was studying at the October Revolution Music College in Moscow was another stringed ax: the domra, Russian round-shaped, short-necked, three-stringed folk instrument. However, the teen-aged Alexey Kuznetsov, Jr. was already in love with a music very different from Russian folklore: it was American jazz he was aspired to master, and his domra was left unused on top on a bookcase in his Moscow apartment after he graduated from the college.

In the 1970s, he worked in the Cinematography Orchestra, which made him the bearer of one of the most recognizable guitar sounds in the Soviet Union: it was his electric Gibson that played the famous title sequence in “Seventeen Moments of Spring” TV series – although few knew that it was Kuznetsov who played those moody notes. At the same time, Alexey Kuznetsov led a jazz quartet inside the Orchestra, with bassist Alexey Isplatovsky, pianist Igor Nazaruk, and drummer Andrey Chernyshev, which released one LP titled “Affirmation” on Melodiya (1976) and performed at the 1979 Jazz Jamboree in Warsaw, Poland, in 1979 (where Polish drummer Kazimierz Jonkisz substituted for Chernyshev.) Kuznetsov also worked extensively with virtuoso pianist Leonid Chizhik, and recorded with him (plus bassist Alexey Isplatovsky) the bestselling 1976 LP, “George Gershwin’s Melodies”.

It was not until 1981 when Kuznetsov released his debut solo LP, “Blue Coral,” which became one of the most popular albums of the 1980s Soviet jazz. The 1984 live follow-up, “A Concert at the Olympic Village,” featured a quintet with another guitarist, Estonian jazz guitar master Tiit Paulus.

After the demise of the Soviet Union, Kuznetsov worked in several combo settings, all straight-ahead-jazz-oriented, of which two trios – one with pianist Daniil Kramer and saxophonist Georgy Garanian, and another, with bassist Alex Rostotsky and accordionist Vladimir Danilin – were the most successful.

In the 1990s, Kuznetsov started a series of weekly guitar workshops at the Accord music store in Moscow, which lasted for nearly two decades, led to the formation of his loose-but-hip Guitar Forms combo, and helped him raise a whole generation of apprentices.

Maxim Shibin was one of those apprentices: he was studying engineering at the university when he fell in love with jazz guitar, started attending the Alexey Kuznetsov workshops, and changed his life course dramatically by abandoning his engineering career and choosing the busy life of a professional jazz performer. Max still performs regularly with several projects led by Alexey Kuznetsov, and also plays in Jazzmobile, a contemporary jazz group led by his wife, singer Alina Rostotskaya.

Concert is supported by
Russian Embassy in Tallinn